Everglades National Park is the largest designated sub-tropical wilderness reserve on the North American continent. Its juncture at the interface of temperate and sub-tropical America, fresh and brackish water, shallow bays and deeper coastal waters creates a complex of habitats supporting a high diversity of flora and fauna. It contains the largest mangrove ecosystem in the Western Hemisphere, the largest continuous stand of saw-grass prairie and the most significant breeding ground for wading birds in North America.

The park is listed under the UNESCO list of danger as it faces challenge from the introduction of numerous non-native species, including in particular the Burmese python, which has proliferated in the park. Loss of organic soils across park habitats, due to wildfires and oxidation associated with over drainage, occurred during and after the major elements of the water management system were constructed between 1900 and 1970. Although hurricanes are a natural phenomenon in the region, intense or frequent storms can damage the already strained ecosystem. Finally, increasing ocean acidification may affect biogeochemical processes related to carbonate precipitation, particularly along the south-western boundary between Florida Bay and the Gulf of Mexico. 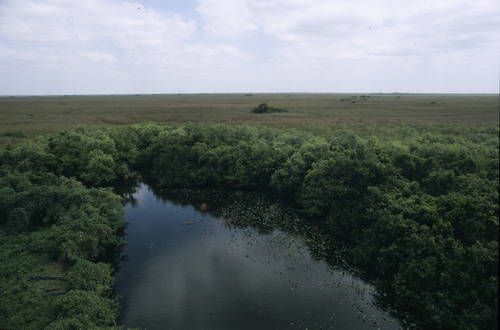